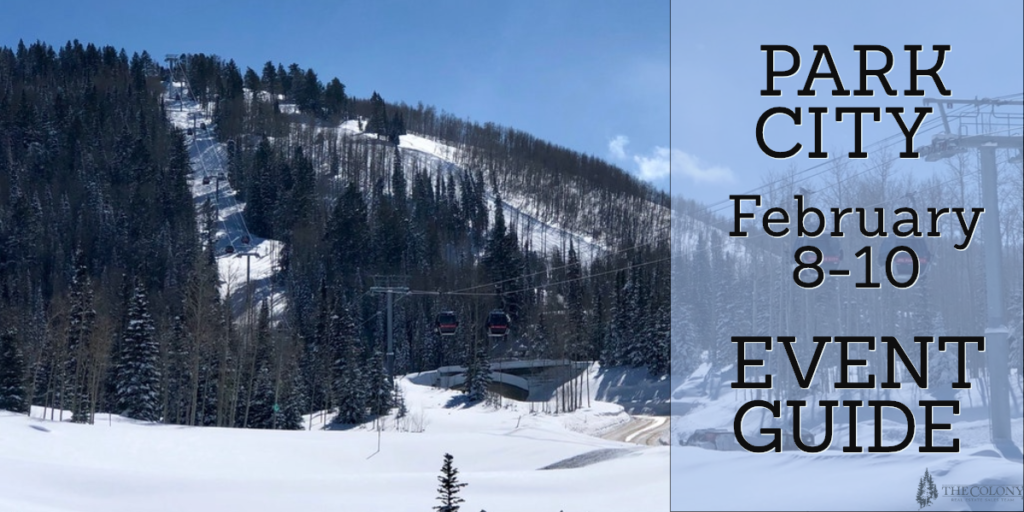 It’s another event weekend here in Park City – with finals scheduled for snowboard halfpipe, freestyle moguls, freeski halfpipe, dual moguls, and snowboard slopestyle in the FIS World Championships. The event is the biggest ski and snowboarding competition our state has hosted since the 2002 Winter Olympics, and most of the events are taking place at Park City Mountain and Deer Valley Resort.

In fact, the event is SO big that a number of eateries in the Park City Area Restaurant Association have joined forces to create special offerings to those participating in – and enjoying – the events. Check here for specials from places like The Twisted Fern, which is offering a free starter (with the purchase of two entrees) at lunch during FIS, Harvest Park City, and Silver Star Cafe.

Nelson Cottage @ High West Distillery
High West Distillery has been hosting a FIS lounge at The Nelson Cottage by High West. The lounge, will be open to the public this weekend, offers coffee and pastries in the morning and, of course, High West cocktails (and snacks) later in the day. Events are broadcast live each date, and art created by the U.S. Ski & Snowboard Team is on display (and for sale!). Any proceeds go to support the athlete who created it.

Snowboard Halfpipe Final
This event begins at 11 a.m. on the 22-foot Eagle Halfpipe. Athletes jump up to 24 feet *above* the lip of the pipe. The scoring is based on the execution of tricks, variety of tricks, difficulty, pipe use, and amplitude. All events are free and open to the public.
~

This is an annual Park City Education Foundation event to raise money for the Park City Bands. $60 per person includes a three-course meal, a silent auction, and, of course, live Big Band music, courtesy of the award-winning Park City High School Varsity Jazz Ensemble. Get your tickets HERE!
~ 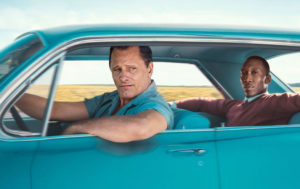 From Park City Film’s website:
“When Tony Lip, a bouncer from an Italian-American neighborhood in the Bronx, is hired to drive Dr. Don Shirley, a world-class Black pianist, on a concert tour from Manhattan to the Deep South, they must rely on “The Green Book” to guide them to the few establishments that were then safe for African-Americans. 8 p.m. screenings Friday and Saturday, 6 p.m. on Sunday.”
~

From the Egyptian Theatre website:
“For 40 years, this Canadian musical legend has been capturing in song the essence of human experience. Bruce Cockburn continues touring in North America in support of Bone On Bone. This will be a solo tour”

Snowshoe Tour of the Preserve
8:30 – 10 AM
Swaner Nature Preserve & EcoCenter

This tour is packed full of fun: learn about wetland science, natural plant and animal species, and the history of the Swaner Preserve, search for and identify animal tracks and other signs of animal life. Be sure to wear sturdy, warm boots, snow pants, hats, gloves, a coat, and bring a water bottle. Snowshoes can be rented from the EcoCenter – $2.50 for members, $5 for non-members.
~ 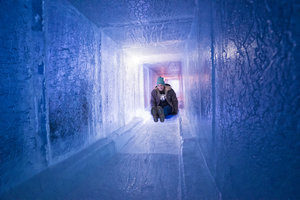 Trek over to the Homestead Resort to enjoy a spectacular sight. On Saturday afternoons, there are appearances from the Snow Princesses (noon – 3 p.m.), and you can grab pictures with them at the entrance of the Ice Castles. Saturday evenings bring fire performances from 7 to 10 p.m. (these also happen on Friday nights). Check the website for details – including tips to make your adventure more fun – and for the schedule.
~

This Discovery Course is an instructional event to guide participants on snowshoeing basics to enjoy this fun sport! The guided trek will not only include tips for snowshoeing, and instructors will also share knowledge of plants and wildlife along the way. Be sure to make a reservation (there is a $25 fee to participate) – all equipment is provided, but be sure to dress appropriately for a couple of hours out on the snow! There’s a full list of what you need when you sign up – you can do that HERE.
~

Climb through the EcoSystem from the bedrock all the way to the uplands! The Swaner indoor climbing wall is fun for all ages. A harness is supplied, participants are asked to wear closed-toe shoes.
~

Another awesome aprés event is trivia at Lucky Ones Coffee, in the Park City Library. The trivia is super speedy, so don’t sleep on this game. One smart device is needed for your team – Wi-Fi provided.
~ 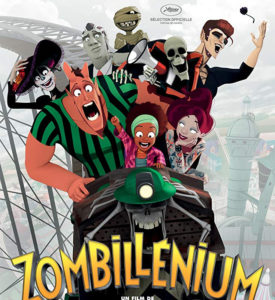 This free screening is presented by Park City Film, as part of its Foreign Cinema for Kids series. From the PCF website:
“Sprung from the comic book pages and crypts alike, celebrated French graphic novelist Arthur de Pins’ characters come to life, or er, undeath, on the big screen with a wickedly wry story of monster liberation. Challenges abound when amusement park Zombillenium is threatened by a corporate buy-out. Fortunately, high-minded ghoul dad Hector, tenacious witchboarder Gretchen, and a collective cohort of zombies rise up and fight in true French form for worker rights—above and below ground—in this clever genre and monster mash up. Recommended for ages 10+.

Presented in French with English subtitles in partnership with Park City Library.”
~ 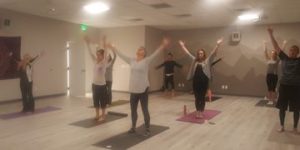 Enlighten Wellness is a brand-new wellness facility in the heart of Prospector and offers an AcroYoga partner class, which it describes as:
“…a beautiful practice that combines the dynamic wisdom of acrobatics, the awareness, breath, and balance of yoga and the healing, loving nature of Thai massage.”
~ 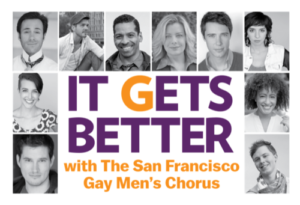 From the Park City Institute website:
“It Gets Better is a newly revamped artistic collaboration with the world-famous San Francisco Gay Men’s Chorus. The It Gets Better Tour brings the experience and message of the online It Gets Better Project to communities and audiences by blending music, theater, and multimedia into a work for the stage.  The cast brings to life real stories from gay, lesbian, transgender, and straight allies from around the country.

With the It Gets Better Tour, a small but dedicated ensemble travels to communities nationwide to produce a week of educational workshops culminating in this moving musical theater performance.  They will bring their mission to uplift, empower, and connect lesbian, gay, bisexual, transgender, and queer youth, for a week of outreach. They will lead workshops in city and county government offices, schools, and other non-profits, developing community resources and connections. The week culminates in a Main Stage performance – equal parts wit, whimsy, empowerment, and inspiration.” 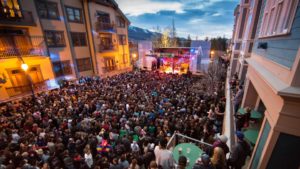 From Deer Valley, the sponsor of closing ceremonies:
“Wasalu Muhammad Jaco, better known by his stage name Lupe Fiasco, is a Chicago-born, Grammy award-winning American rapper, record producer, entrepreneur, and community advocate. The independent rapper who parted ways with his former label, Atlantic Records, following the release of 2015’s Tetsuo & Youth, is pegged as one of the most gifted lyricists and visionaries to grace the mic. Rising to fame in 2006 following the success of his debut album, Food & Liquor, Lupe has released six acclaimed studio albums; his latest being Drogas Wave, released in 2017 on his own label, 1st & 15th. These albums have netted 3 platinum singles, 3 RIAA Gold Certifications, 12 Grammy nominations and one Grammy Award in 2008 for his infectious single, “Daydreamin,” feat Jill Scott. With a trilogy of albums set for 2018 and beyond, Lupe is at his creative peak as an artist. His efforts to propagate conscious material helped solidify him as GQ’s Man of the Year in 2006, and garnered recognition as a Henry Crown Fellow.”
~ 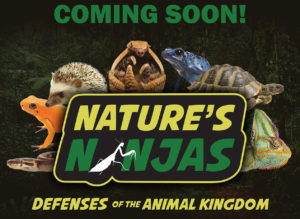 A new traveling exhibit is on display! Kids and adults can explore “some of nature’s wildest defensive adaptations.” The exhibit takes a look at nature’s most misunderstood animals — everything from porcupines to geckos — and walks visitors along how and why animals develop their unique natural defenses.
~

Kids of all ages are invited to enjoy the complimentary Swaner Craft Sunday! Join the fun at the Swaner Preserve and EcoCenter, and create a nature-themed craft to bring home.
~ 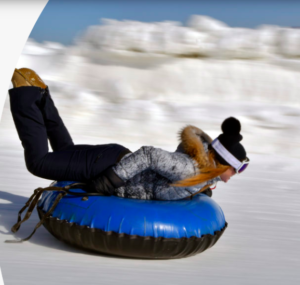 Faster lifts from an upgraded lift system mean shorter lines at Soldier Hollow Nordic Center! When you pair that with the 1,200-foot sliding lanes, you get an unbeatable outdoor adventure. You get two hours of tubing with your ticket, and there are also night sessions! More info HERE.